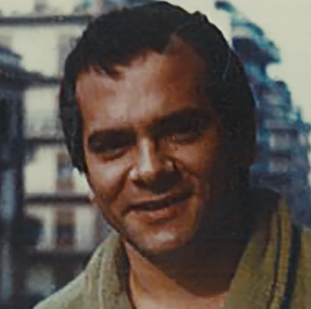 3rd of May 1989: while having a shower in San Patrignano’s butcher department, Roberto Maranzano endured a vicious beating, ordered by the department manager Alfio Russo, for trifling causes, carried out by some of his colleagues in the department and probably by Russo himself.

The following morning he was heard groaning and wheezing, appearing worse for wear and heavily swollen, and finding getting up trying. Alfio Russo, maybe worried, decided to let him rest in bed for that day, goading him into reacting and mocking him at every opportunity, minimizing the extent of his suffering. Next morning, during the 05.30 wake-up call, Roberto’s condition is still worrying, he walks with some effort, pants, his face is swollen. But this doesn’t soften Russo at all, who is convinced he is faking it in order to skive.

He is forced to get on a van and to go to the pigsty, and when arrived Alfio Russo orders him to unload from a truck bags of pig-feed which weight thirty kilos each (approx. 5 stone or 70 pounds). Roberto tries to do so but falls on the floor at the first attempt. Russo pounces on him, hitting him repeatedly with kicks on the abdomen and chest, then orders to carry him inside the pigsty.

Here the event reaches its epilogue. Russo, long lost any flicker of reason, keeps pig-headedly believing that Roberto is deliberately resisting to get back to the job at hand and beats him up savagely many times in a row, involving also Lupo (Giuseppe Lupo, a member of the San Patrignano’s “punitive squad”, N.o.t.T.) and other people in the absurd attempt to force him into work, until the moment when Roberto Maranzano flops on the floor without giving any signs of being alive.

Ascertained Roberto Maranzano’s death, Russo and the others have an on-the-spot meeting to decide the best corse of action, then Russo brushes off any doubt and goes off to talk to Vincenzo Muccioli.

He excuses himself for a short while, then comes back with a plan to get rid of the corpse.

He orders Lupo and Persico (Ezio Persico, another member of San Patrignano’s punitive squad, N.o.t.T.) to wrap the body in a blanket, load it on a Community’s car and fetch it down south, ‘round Naples’ way, and reached therein, dump it somewhere.

Lupo and Persico carry out the orders: Roberto Maranzano’s body will be left in an illegal rubbish dump in Terzigno, near Naples, with the intent of staging the man’s escape from the rehab community and a subsequent settling of a dispute.

9th of May 1989: Roberto Maranzano’s corpse is discovered in an illegal rubbish dump in Terzigno (Naples). Maranzano was thought to have escaped from the community. In those very same days Vincenzo Muccioli, pretending to have gotten to know only then that the escape had ended in death, maintains to have gone to the butchers’ department meeting the guests of the community in order to minimize the emotional impact of the news.

8th of March 1993: following the deposition of Franco Grizzardi (a former guest of San Patrignano) about Roberto Maranzano’s death, seven orders of precautionary arrest are issued for guests of San Patrignano rehab community managed by Vincenzo Muccioli. Those arrested are: Alfio Russo, 38 years old; Giuseppe Lupo, 32; Ezio Persico, 42; Stefano Grulli, 32; Alessandro Fiorini, 29; Fabio Mazzetto, 30 and Mariano Grillo, 29. The measures, which speculate on the charge of involvement in unintentional aggravated murder, are issued by Rimini’s judge of preliminary enquiries, Vincenzo Andreucci, on request from the public prosecutor Franco Battaglino. Andreucci is the same magistrate who in the 1980s set up a trial against Muccioli and 12 of his collaborators for kidnapping and mistreatments (the so-called Trial of the Chains). For those events Rimini’s tribunal issued a guilty verdict the 16th of February 1985, but the court in Appeal turned the ruling over the 28th of November and the 5th section of the court of Cassation closed the case on the 29th of March 1990, confirming the acquittal of the charge of kidnapping because Muccioli and the others had acted under the condition of alleged necessity and not with the consent of the drug addicts, and the acquittal of the charge of mistreatments because not punishable because of unintentional excess in state of alleged necessity.

Anyway, Vincenzo Muccioli confesses he knew about Roberto Maranzano’s murder. Muccioli tells the magistrate to have kept silent because this was the agreement he had undertaken with the other guys. Muccioli, commenting with journalists the events of Maranzano’s death and the arrests, had said: “It has been a hurricane out of the blue”.

In a press conference San Patrignano’s founder states he doesn’t know anything about what has happened.

9th of March 1993: Franco Grizzardi, 30 years old, who had started the enquiries with his deposition, is arrested. Fabio Mazzetto is freed.

12th of March 1993: San Patrignano’s founder, Vincenzo Muccioli, shows up on his own accord.

17th of March 1993: no longer unintended homicide, but intended homicide, aggravated by tortures. This is the new charge notified to Alfio Russo, the former boss of San Patrignno’s butcher department, considered by detectives the person of most interest in Maranzano’s murder.  According to the investigators, the charge against Russo is aggravated because Maranzano has been literally battered.

Judging from the dynamics of the beating’s second phase, from other people’s stories, from the condition the corpse was left in (split collarbone and six broken vertebrae), the prosecutor is  convinced that the death of the young man has not been an accident, but it had been planned.